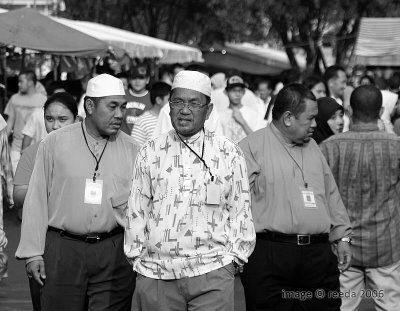 Been reading with great interest Mr BR's pieces on Brunei Malay wedding gear and Mamalobeng's Power of Underwear eheheh (funny girl that one!) and the one thing that comes to mind is which is culture, which is religion and where do we draw the line?

Do we as a society adopt the practices of our ancestors when it suits us eventhough it goes against religion? Why have lavish weddings when some of us clearly cannot afford them? Why throw a perfectly good pair of underwear on the roof to prevent rain when it's clearly God's will that it rains? I'm sure there's numerous fatwas from the state mufti on this issue so I won't go into them.

To me, its all about our world-view and how it shapes the way we conduct our daily activities from weddings to funerals. A world-view provides us with a structure of reality; it defines, classifies, and orders the "real" in the universe, in our world, and in our society.

A world-view embodies man's most general conceptions of order. If this is accepted as a working definition, then religion provides a people with their fundamental orientation toward that reality (Anthropology 101? heheh).