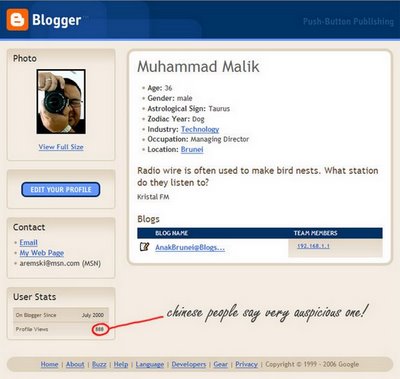 It's finally happened. Someone got prosecuted and charged for tapping onto another person's wireless internet access. I wonder if the same applies in Brunei under our Computer Misuse Act? From Sydney Morning Herald:

Garyl Tan Jia Luo, 17, is the first person to be charged with this crime under the Computer Misuse Act, the Straits Times reported. The newspaper said a neighbour had apparently lodged a complaint against Luo.

Tan was released on a bail of S$6,000 and is scheduled to appear in court on Wednesday. If convicted, Tan faces up to three years in jail and fines of up to S$10,000 under the Computer Misuse Act.

My question: Didn't the neighbour practice good wireless security by using some kind of password on his/her network? You don't leave your front door wide open for people to walk in do you? Ok, maybe if you live in Kampong Ayer but thats beside the point.

These days its pretty simple to set up a secured wireless network. Some wireless routers even have one-button security set-up. So to those of you who still leave their wireless routers on default setting... Have a go at setting up the security. It's a worthwhile exercise...

Ya ya, you IT security experts will laugh and say its so easy to sniff and crack (no pun intended!) these things, but something is better than nothing lah! At least give the hacker SOME work to do hehehe!