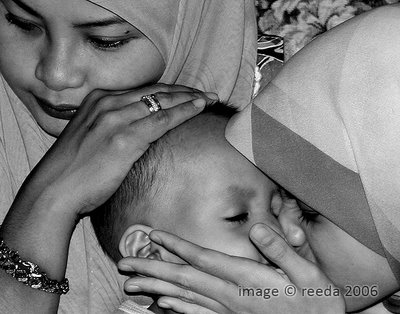 My buddy James was asking me the other day to name 4-6 most influential people in Brunei Darussalam's IT development. It was food for thought and I thought long and hard about this over the last few days and James, if you're reading this, below are my nominees:

HRH is very IT savvy and like all the younger generation, is very comfortable with ICT. I had the honour of presenting HRH with a PDA once and he took to it immediately, and I set up wireless internet both in his office at MFA and in his room at the palace so that he could access the internet from his PDA.

This was some years ago when wireless was still a novelty. But from this interaction, I could already imagine HRH being the architect of a globalised Brunei (Cyber-Brunei?) where the knowledge economy would thrive.

Not many people know this, but Brunei was already using the smart-card when other countries in ASEAN were just discussing plans to adopt its usage. The national smart-IC will be the nucleus for citizen-centric delivery of e-services in the future.

As chairman of the E-Government Program Executive Committee (EGPEC), Pehin was the prime-mover for the strategic planning for and the adoption of IT in government. Through his leadership, the government was able to put together a strategic IS/IT plan which still serves as the road-map for IT adoption in our government today.

Hj Mahmud was a key figure behind the scenes for the adoption of IT in government and played a vital role in putting together the first public-private sector partnership initiative in the form of a joint-venture company between the Ministry of Finance and an international IT services firm. The JV company has grown from strength to strength in providing employment in the IT sector to our young Bruneians.

Wallace was the dude who assigned to put together the core of our present internet gateway. Of course during those days, it was dialup access at 14.4, then 28.8, then 56k. Ridiculous by today's minimum of 512kb on e-speed. But during that time, people like me who had just returned from abroad were suffering from internet withdrawal and any access was better than no access. That early exercise was the foundation for the "cyber-Brunei" that we have today, with Bruneians like LSM, Maurina, Emma, and Rano putting their mark on the blogosphere.

Some dude named "BKiD" - Channel Manager of #Brunei @ Undernet. The largest IRC network in the world.

OK this is the self-promotion bit lah hehehe. Back in 1996, there was this dude who had just returned from abroad and missed his Internet Relay Chat buddies. So after discovering Brunet, he proceeded to register the #Brunei channel on the Undernet. This was the early manifestation of "cyber-Brunei" which still lives on to this day.

At its peak, #Brunei would have upwards of 1000 users on the channel at one time, mostly Bruneians at home and abroad, communicating via the internet and exchanging the latest goss and news, much like MSN or Yahoo is being used today.

So there you have it James, my own "most influential Bruneian IT figure" list. This is of course, my personal opinion, and I stand to be corrected from every perspective. The whole idea here is to stimulate some kind of discussion on this topic.

Comments and inputs welcome on the photo too... Heheh, cool bananas...

Also relevant: Check out s@s' piece on the IT industry in Brunei