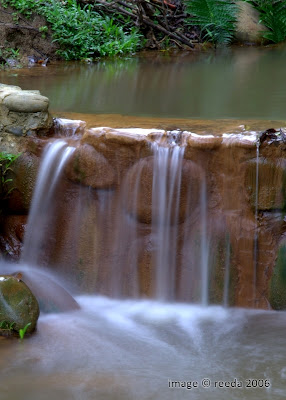 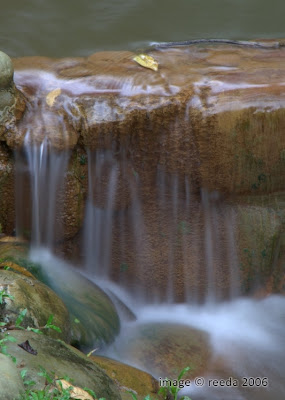 My maiden attempt at shooting flowing water. This could easily turn into an obsession... Wasai Labi is calling...

Incidentally, I finally took possession of my Canon 50mm 1.8 II today after a month and a half waiting. It seems there is trouble brewing in the ranks of digitalworld and I almost didn't get my lens as the price had suddenly shot up to almost three times what was quoted in the website!

Anyway, after a brief argument, the boss(?) reluctantly honoured the price stated on the website but not without grumbling that it was below cost (yeah... I believe you) and then stating that at this price the lens was WITHOUT warranty.

I think this is absolute bollocks, and have a good mind to mention this lousy trading practice to RTB consumer affairs(?) I think if the tables were turned, the gentleman I was dealing with would be jumping up and down throwing a big fuss cos he looks the type.

Personally, I don't think its very nice to be dissing the person who made the mistake on pricing in front of the customer. I mean, I don't wanna know about it dude. All I know is I ordered it at this price and a deal is a deal. Innit?