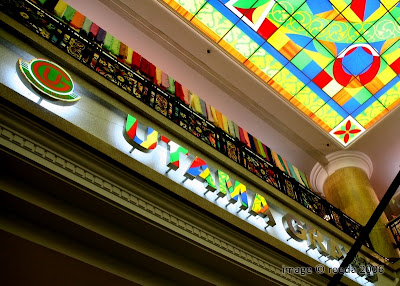 Tonight the missus and I went to catch the new Malaysian movie hit, "Cinta". There was quite a crowd at the cinema. I'm thinking its a guy thing, cos none of the guys I met wanted to admit they were watching "Cinta" opting instead to just smile sheepishly.

Noticeably, most of the audience were couples, and it wasn't just tonight, even Pablo took his bunny along last week. But then I guess no guy in their right mind would go watch this movie alone, and the ladies of course will drag their significant other to go watch it.

Anyway, the movie turned out to be brilliant! Both visually and substantively. The cinematography was very impressive. Some breathtaking scenes of KL and its surrounding areas. I must say, it was filled with lots of eye-candy from start to finish.

10 stars, 5 love stories, 1 movie. Thats the whole idea behind the movie. Call me cheap but I think its good value for money heheh! Not new by any means, but rather following in the genre of Love Actually, and Four Weddings and a Funeral and thats ok cos it works.

The movie takes you through a rollercoaster of emotions from happiness, to sadness, to anger, to sorrow, and then back to happiness only to repeat the ride all over again. Every sequence was crafted to push a particular button and push the button it did! It was both an exhilirating and cleansing experience.

This is definitely one of THE malaysian movies of the year in my book, and I'd imagine, many others' books as well. I give it five stars! If you haven't, go watch it with a loved one. Money well spent! FIVE stories in ONE movie wat!
Check out my other reviews:

September 13, 2007
... In the past, hadrah was only performed during weddings, but now it is performed in open events, to greet honoured guests and more significantly to signal the arrival of His Majesty in various events...

... Brunei youths nowadays have done well in preserving the heritage and have even enhanced it. Back then, competition involved only beating of drums and chanting. But now performances are choreographed to make it more attractive and interesting...

... hadrah could be further promoted in Brunei if there is a national association of hadrah set up. "We have a national team for silat and gasing (top spinning), but not for hadrah. We cannot just rely on mukim and schools to promote the activity, it has to be done at a national level...